What started as a couple teenagers put together in a 10x8 High School Band practice room in '97, has grown into an organization with chaos levels commonly associated with a small circus.  The trombone and the flute were temporarily set down to juggle the diaper bags and pacifiers, and the Topaz grew into an eight-seater minivan.  We are the Sutherlands, and this is our corner of the interweb where we intend to display, and hopefully spread, our beautiful mess to the world.

Practice makes perfect: la petite princesse finally arrives on the fourth attempt.  Blows our hearts to smithereens with one coy look, and can't keep from smiling when the wind is blowing in her face - even in -30 degree weather.  Was born to tease, we always have to steal our kisses from her.

Our resident Strongman, the Gentle Giant.  A solid tyke known for an over-the-top affability, interspersed with brief bursts of outrage when encountering a situation he doesn't comprehend. (IE: Ice cream after main course, as a general rule of thumb in our house.) Astounds strangers and friends alike with his sophisticated conversation skills, which developed almost overnight after his second birthday. 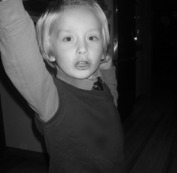 The protector who will fight to the death defending his older brother - usually doing so with a roguish grin.  Voraciously eats his vegetables in hopes of one day becoming stronger/faster than Dad, which he hopes to accomplish prior to turning six.  Judah has the unnerving ability to ask questions that leave you stumped for days, and is chiefly responsible for his parents abandoning the "spanking" method of behavior modification.  Known on a first-name basis at most local ER's (2nd degree burns, broken legs, amputated finger tips, etc.).  Judah is also the only member of the family who has no problem chowing down a chunk of animal flesh.  He will babble gibberish in his french accent for multiple sentences and does not question his fluency.

A fervent sense of justice and a zeal for virtue (at least the appearance of!) will no doubt cause his friends to groan during mischievous capers.  Ariel could not even bring himself to eat his Thanksgiving Tofurkey after Dad ceremoniously chopped its bird-shaped head off.  One word which describes Ariel well is "particular."  Ariel loves his crafts, draws his letters very slowly, points his toes at gymnastics, and ensures everyone has their seat belts on prior to the van moving an inch.

Ariel consistently comes home with most of his uneaten lunch ("It was a short lunch today . . ."), and refuses to be rushed for anything, much to the chagrin of his teacher and mother alike.  His teacher has called him Mr. Personality, and there is always a parade of 6 year old girls pulling him along, which he pays absolutely no notice to.  If his dad could start things over again, he would like to do it as someone like Ariel. 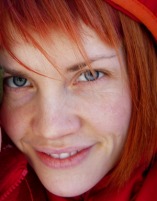 When Amanda is talking to people about Wednesday night metal smithing classes, Tuesday and Saturday gymnastic classes, and daily trips to the Millennium Place Recreation Centre, they often comment on how busy four kids must keep her.  Although the kids do keep her very busy, these are HER activities, not part of her soccer mom role!


Watching Amanda juggle the domestic duties that come from caring for her favorite people, her health & fitness addiction, arts & crafts bent, and career aspirations is akin to watching a colorful Cirque du Soleil performance: a chaotic blur of movement, brimming with grace & style.


At the moment, Amanda is enjoying being a full-time mom and trying to hack the clock and slow down the growth of her kids - which she finds way too fast.  Underneath the facade of a pleasant suburban mom, she is ferociously competitive and will do everything in her power to whoop her husband's ass at the gym - which she does on a regular basis.  Over her morning coffee [current favorite: local brewer Transcend's El Salvador] she is scheming plans to get more people get hooked on Crossfit, and living well.  Amanda can do 15 (March 19,2009 Update: 20) chin ups, and counting.

Jeff finds it ridiculously funny when people write third-person bio's, so instead he offers up a few of his favorite things.  Jeff in 100 words or less:

Thank you, your message has been sent